A Time Traveller’s Tour: The Charterhouse and Clerkenwell 1431

I’m Jessie, a Collections Volunteer at the Charterhouse, and I’m going to take you on a walking tour as we step back in time to 1431, to visit the medieval Charterhouse.

In 1431 the Charterhouse produced a map presenting the monastery’s water system, which survives today as part of the Charterhouse’s collections. This map opens a window for us to step into the historic landscape of Clerkenwell and explore the history that shaped it.

When/Where are we? 1431, on the north-western corner of the City of London’s walls. This is Clerkenwell, but not as you know it: fields surround us and that hum you can hear is not cars, but the rush of streams and rotation of the mills in the meadows.

Why are we here? London in 1431 was an expanding medieval city that had emerged from several turbulent events in its recent past, and the Charterhouse was one of several religious orders to witness to these events. We will be exploring the area that was shaped by both these events and the people who lived, worked and worshiped here.

Will I need a coat? Yes, the air is a bit crisper than what you’d experience in 21st century. Londoners in the mid-15th century experienced a mini-ice age – not great for locals, who struggled with the cold and food shortages.

Will the locals mind us? We have the go ahead from the monasteries. You may see boys with bows wandering around, but they shouldn’t be any trouble; the area has been given over to the religious houses (albeit a reason for a couple of disputes between the locals and monks).

Our first stop is what you may know in the 21st Century as Charterhouse Square. 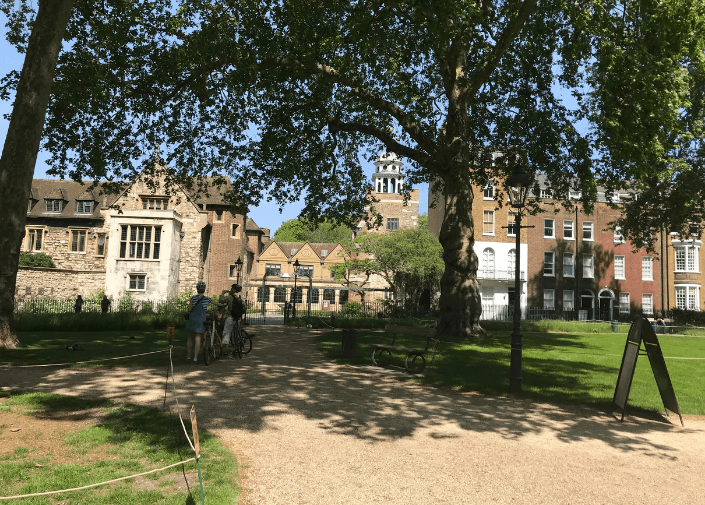 A vast patch of land being used as a graveyard with a simple chapel.

This site is a legacy of the Plague of 1348. The unsanitary and crowded conditions of London allowed this deadly disease to spread uncontrollably, killing thousands. Within the City Walls, Londoners struggled to find burial grounds and so this patch of wasteland was used as a plague pit. 50,000 Londoners may be buried here in unmarked graves.

Following the plague, a flurry of religious houses were set up throughout the country –more churches were needed to pray for those who died and some hoped that this would encourage god to not curse humanity like this again. We are within the vicinity of four of these renowned orders. Lets go and visit a couple.

Leave the graveyard and walk north, towards a complex of inward looking buildings, coming to the Charterhouse.

A church with a tall spire and the Great Cloister; an open courtyard surrounded by 24 alphabetised cellblocks. The buildings are simple, lacking in ornamentation, which is the typical style of a Carthusian Order. 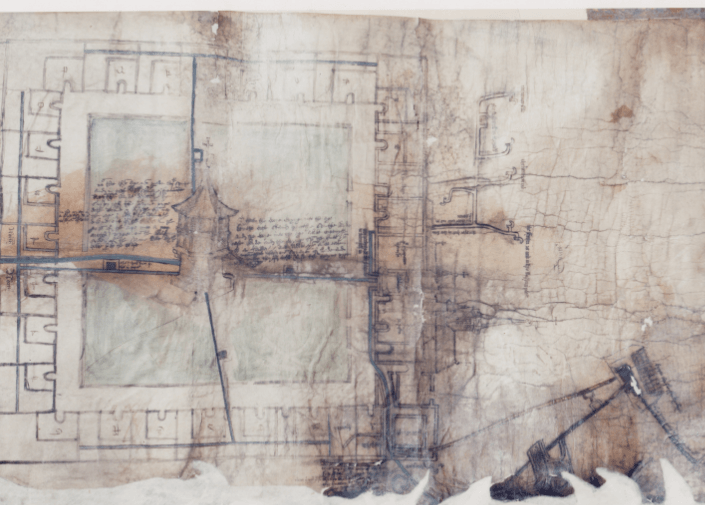 Medieval map of the water supply to the Charterhouse

You may notice that it is very quiet. A cloaked figure walks around the cloister passages, leaving bread outside each cell door. Guichets, hatchets by the cell doors, open and hands reach out to take the bread. This is all we will be seeing of the monks. 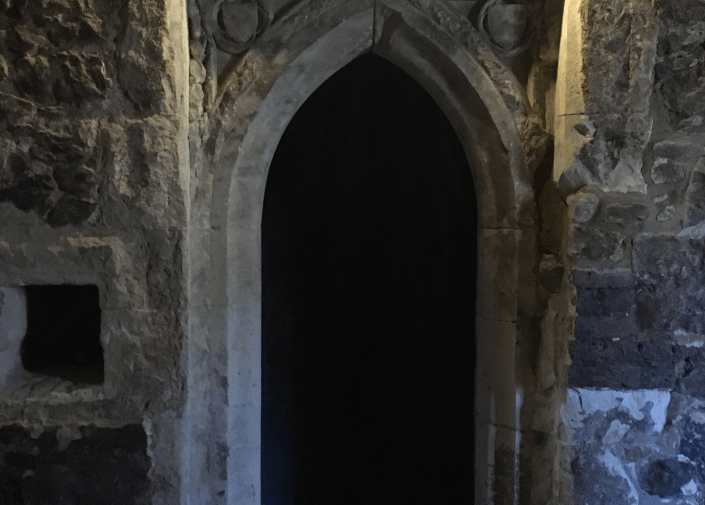 While the plague still raged through London in 1348, a soldier, Sir Walter Manny bought some land by the plague pits (considered quite brave) and set up a chapel and hermitage.

By 1371, Manny had founded a Carthusian Monastery and began building the Great Cloister. The Carthusians are a French order who are completely solitary. They only speak to each other on festival days and rarely leave their individual cells.

It was in this year that the monastery used a spring from a meadow called Overmede in Islington and the water map was drawn up. The water was brought along pipes through pasture, and across the near-by religious orders’ land to the monastery, which they had to negotiate. One of these monasteries will be our next stop.

Leave the Charterhouse and walk north, crossing St John’s Street – a busy highway with traders and drovers ferrying their livestock to the meat market.

Walk towards the gated walls to St Johns Priory.

A small ‘walled city’, with two gates on the south and north side.

From the south side, the gate opens for two Knights, who begin handing out food scraps to people who had been loitering by the priory – serving the poor is part of their duty as Knights of the Order.

Over their shoulders, you can catch a glimpse of the priory: several buildings stand around a pond and mill; there’s an orchard and gardens, and also an armoury.

St Johns Priory has been here since the 1140s. It is a wing of St John of Jerusalem, an the order that spread all the way to Jerusalem where the Knights Hospitallers were based. Many knights set off on Crusade to the Holy Land from this priory.

The priory may still be healing from a deadly event in its recent history. In 1381, rebels led by Watt Tyler in the Peasants Rebellion descended on London, protesting taxes that were paying for the Hundreds Year War in France.

The mob came to the Priory looking for the Prior Robert Hales, who was behind the raising of the taxes. Despite not finding him here (Hob the Robber was hiding at the Tower!), they burned the priory to the ground. We will hear more about what came of this revolt at our next stop.

Turn around and head back towards St Johns Street, joining the ranks of the moving cattle to the smooth field

A large, grassy, flat field just north of the City. The Fleet River runs to its west.

There is an overwhelming smell and noise of animals; cows, chickens, pheasants, geese and ducks are being organised, some allowed to graze, others are sold off, and some are slaughtered where they stand: this is London’s main livestock market.

Down the field, closer to the city walls, gentry ride horses at one another, the flat field being good grounding to practice jousting for tournaments.

This site has amassed a bloody reputation, not just for the meat market, but for executions. In 1305, William Wallace (a leader of the Scottish War of Independence) was dragged here through the City at the heels of a horse, and hung, drawn and quartered.

More recently, in 1381, the Peasants Revolt was brought to a bloody end here when Wat Tyler met to negotiate with King Richard. The negotiations didn’t go well, and as tensions rose, the Lord Mayor murdered Tyler in front of his forces. This effectively ended the revolt, with the rebels retreating, many of whom were hunted down and executed. 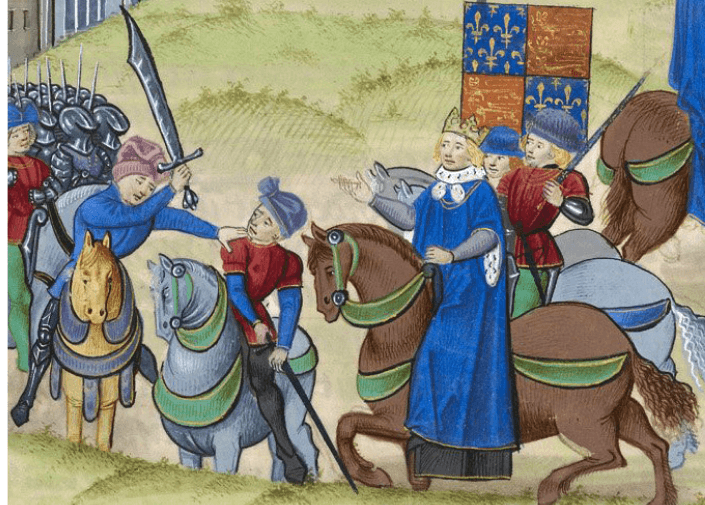 The Death of Wat Tyler

On a lighter note, for a couple days in the Summer St Bartholomew’s Fair takes place here. This is the country’s main cloth fair and dates to the 12th century- when Henry I gave the licence to a former court entertainer who wanted to juggle at the fair. By 1431 it has transcended into a lively and popular jamboree fair, with jugglers, performers and animal fights.

And that’s a wrap, thank you for joining me on this historic tour. If you’re still keen for a bit of time travel, visit the Charterhouse Museum where you can see the Monks’ water map and be transported to more intriguing periods of its past.