Welcome to the Great Chamber - the Charterhouse’s most magnificent space.

The Great Chamber has played host to grand royal occasions and was the backdrop to decades of Tudor plotting and intrigue. It is the only Tudor great chamber to survive in London and remains the jewel in the crown of this ancient historic site.

Our newly refurbished Great Chamber is now open to the public and can be seen on pre-booked tours. You can also uncover the room’s stories and learn more about its history through our virtual tour. The numbered points throughout reveal hidden facts and information about the room and its portraits. (You can also discover our wonderful Soundscape here – bringing alive the Great Chamber’s stories and how people respond to them today).

The room was created in the 1540s as part of a palatial mansion built from the ruins of a Carthusian monastery. It was embellished around 1570 by the Duke of Norfolk, who inserted a grand fireplace and a lavishly decorated ceiling. The Great Chamber was intended as a room of splendour and prestige. Elizabeth I met her Privy Council here in 1558 before her coronation and both she, and James I were hosted here on many occasions after that. After 1611, when the site became a school and almshouse, the governors held their meetings here. The room you see today has been altered over the centuries, including remodelling after fire damage during the second world war. The most recent restoration was completed in 2020 and is intended to emphasise the room’s grandeur, rather than reconstructing its design specific to any one historical period.

Discover a history of the Great Chamber through the ages

The Great Chamber has played a fascinating role in many of the significant moments in London’s history throughout its colourful past. Here we are able to offer a small glimpse into depictions of how the room once looked dating from the early 19th century onwards. The room was rebuilt in the 1950s, following fire damage during the second world war, and was refurbished again in 2020 as part of our National Lottery Heritage Fund project. 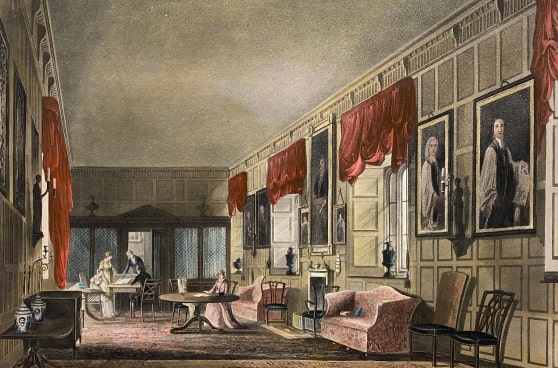 This print shows the Charterhouse’s Long Gallery, a Tudor room destroyed by the 1941 fire that also gutted the Great Chamber. When this print was made the Long Gallery formed part of the Master’s private apartment and was where the governors’ portraits were hung. 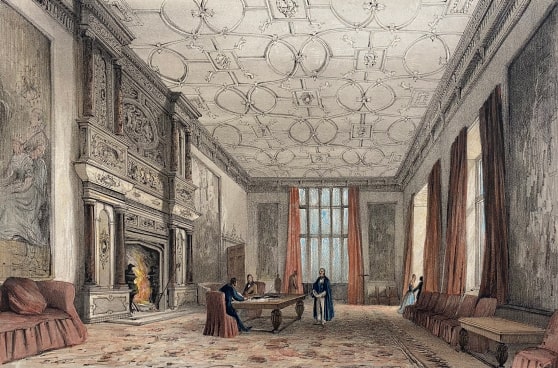 This view shows the Great Chamber after it was remodelled by the architect Edward Blore around 1840. Blore inserted the large west window and added a decorative cornice around the ceiling. 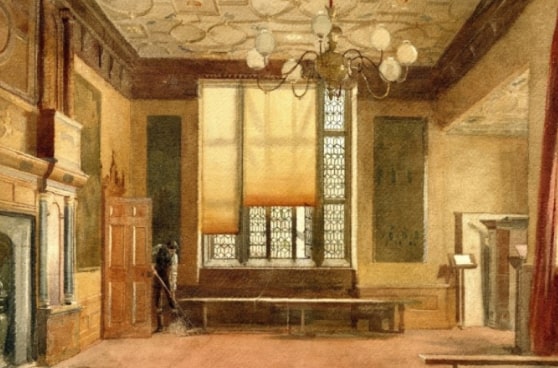 A watercolour by Frederick Smallfield showing the Great Chamber at a time when the space was little used. The tapestry panel shown on the left of the window is hung in the anteroom today. 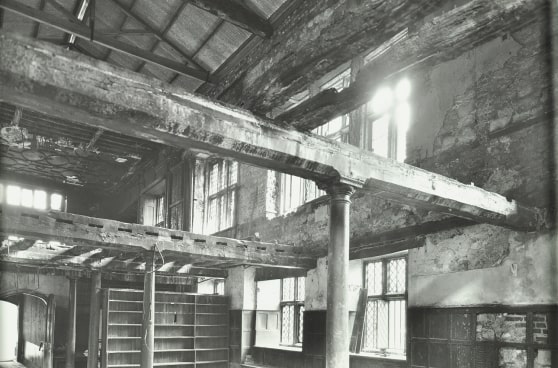 This photograph shows the fire damage caused by incendiary bombs during the second world war to the Great Chamber and the Old Library beneath. You can see a small section of the surviving ceiling design at the back of the room. © London Metropolitan Archives 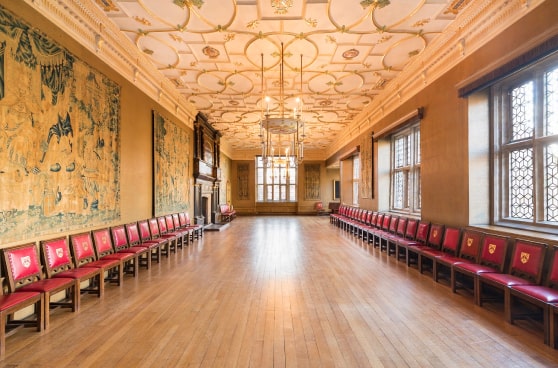 Architects Seely and Paget were appointed in the early 1950s to renovate the Great Chamber. This image shows the room prior to the 2020 refurbishment. - Photo: Mark Mercer 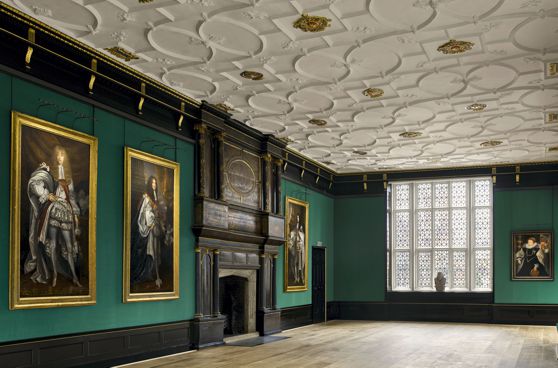 The new design references several different architectural schemes from different centuries. The colours from the fireplace and overmantel (dating from the 16th and 17th centuries) ar carried throughout the space and a green silk moiré provides the backdrop for our important collection of Restoration portraits. The floor has been replaced with boards of varying sizes and widths, referencing its post-Reformation origins.

The portraits in the Great Chamber

The portraits in the Great Chamber show some of the Charterhouse’s governors during the last half of the 17th century. These men were the political elite of their day and steeped in the turmoil of the period. The restoration of the monarchy in 1660 brought fierce debates about the rule of law, civil rights and religious toleration in England, Ireland, Scotland and settlements overseas. The men who governed the Charterhouse were players in these national debates, often as political rivals. The portraits at the far end of the room show two of the Charterhouse’s earlier owners. Alongside Queen Elizabeth I is Thomas Sutton, the wealthy financier whose will of 1611 transformed the Tudor mansion into a charitable institution.

Find out more about the Charterhouse’s Restoration governors by scrolling through the excerpts below or by downloading a copy of Dr Cathy Ross’s e-chapter from our beautiful new book on the Great Chamber, also available on sale here. 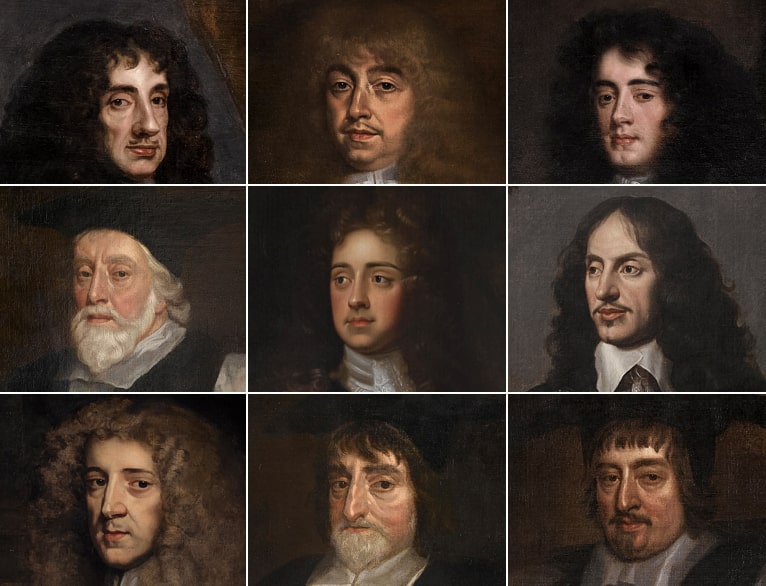 “The ten Restoration governors whose portraits now hang in the Great Chamber represent the full spectrum of warring views.”

“They include the first Earl of Shaftesbury, scourge of Anglican bishops; Bishop Humphrey Henchman, scourge of nonconforming Protestants; Archbishop Sheldon, éminence grise of conforming Anglicans; George, second Duke of Buckingham, éminence grise of esoteric free-thinkers; a king who was secretly sympathetic to Catholics; his wayward son the Duke of Monmouth – openly stoking populist hatred against Catholics. Monmouth met his end on the scaffold, Shaftesbury died in exile: both deemed guilty of treason.” Clockwise from top left: King Charles II, the Duke of Buckingham, the Duke of Monmouth, the Earl of Craven, Archbishop Sheldon, Bishop Morley, the Earl of Shaftesbury, Bishop Henchman, the Earl of Shrewsbury. Photographs: Will Pryce. 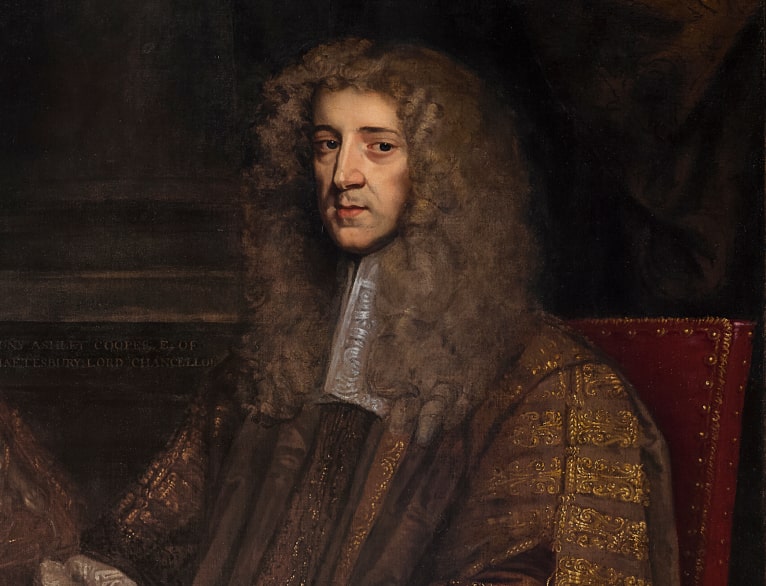 “At the Charterhouse, new Brothers were required to take the oaths, as were new governors and officers, but it was said around 1680 that the practice had not been observed rigorously in recent years.”

“It is certainly possible that some pensioners admitted in the 1660s and 1670s were not as orthodox as the bishops would have liked. Looking at the nominations from the Earl of Shaftesbury, were any of the men moderate dissenters? No definite example has come to light yet, but it is possible that governors may have turned a blind eye to a nonconformist Brother in the 1670s. A Catholic Brother, however, was beyond the pale.” Anthony Ashley Cooper, first Earl of Shaftesbury, painted in 1673. Photograph: Will Pryce 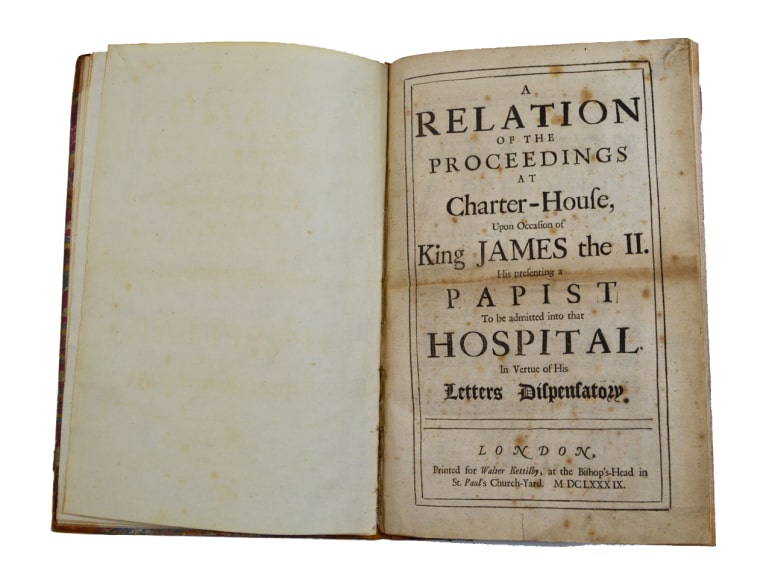 “The sixteen governors formally met in assemblies twice a year.”

“The December assembly was devoted to the hospital’s finances, its substantial property portfolio yielding an annual income of £5-6,000 by the 1670s. The June assembly was when nominations for new Brothers and Scholars were approved. Normal day-to-day business was managed by the Master, but the governors formed a court of appeal, particularly when money was involved.” Title page of the 1689 account of the Charterhouse governors defiance of James II. 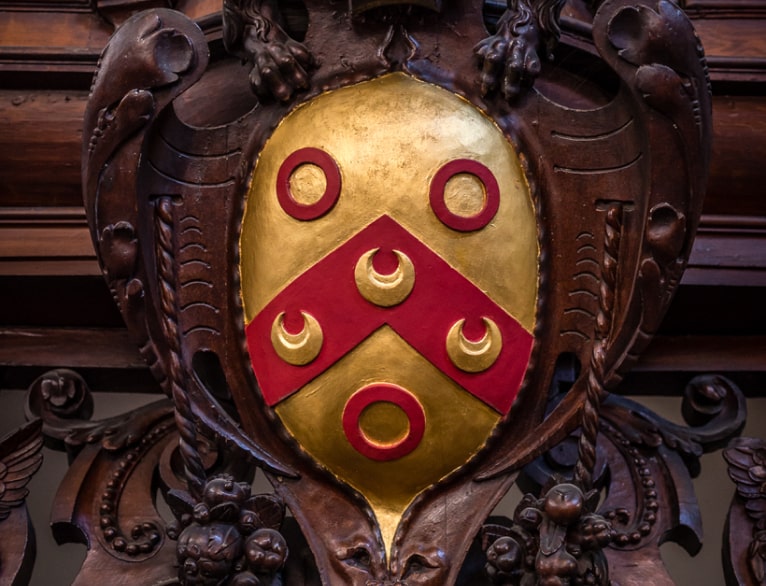 “Did ‘the Hospital of King James founded in Charter House in the County of Middlesex at the humble Petition and only Costs and Charges of Thomas Sutton Esq’, influence the two royal hospitals which followed it?”

“These were, of course, the royal hospital for soldiers at Chelsea conceived by Charles II in the early 1680s; and the royal hospital for seamen at Greenwich established by Queen Mary in 1694. Did the first Stuart royal hospital provide a ready-made template or an example of what not to do?” Thomas Sutton’s coat of arms, carved on the seventeenth-century organ screen in the Charterhouse chapel. Photograph: Lawrence Watson.

Find out more about the people behind the portraits in this free e-chapter ‘Men of Honour and Power’ by Dr Cathy Ross from our brand new book on the Great Chamber. Available to purchase from our online shop here:

The Beautification and Refreshment of the Great Chamber

This refurbishment of the Great Chamber is the first since the 1950s and was conceived and carried out with the vital support of the National Lottery Heritage Fund and our generous donors.

During the second world war, the Great Chamber was gutted by an incendiary bomb. Repairs by architects John Seely and Paul Paget remodelled the room’s proportions and redecorated to suit 1950s taste. The 2020 scheme has been drawn up by conservation architect Richard Griffiths. The aim is to create an inspiring space which reflects the room’s rich history but which also meets today’s environmental standards. The wood panelling in the far alcove is new and evokes the room’s original Tudor appearance. Here, the Duke of Norfolk’s plasterwork ceiling survives with least alteration. The painted fireplace has been restored to its 17th century appearance. The walls are now lined with green moiré silk, a sympathetic setting for the recently conserved paintings. Discover the detail of the project in the films below, and you can also watch the recording of our online launch event, featuring many of the experts involved here. 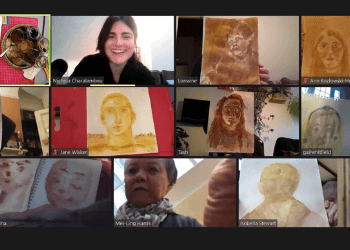 We are running a Community Engagement programme to introduce new audiences to the Great Chamber and its stories. This includes a wonderful Soundscape which captures the Chamber's history and how people from different communities relate to those stories today. Find out more here continue 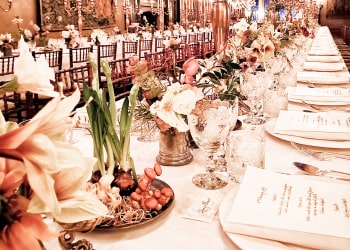 Did you know you can hire our Great Chamber and other spaces for private events? Contact our events team to find out more continue 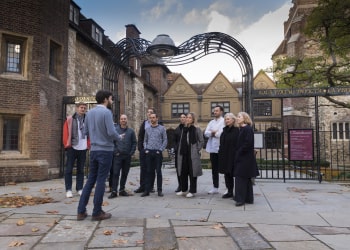 We are open! Discover what's on at the Charterhouse! continue