It is 650 years since the monastery at the Charterhouse was established here in London. Here James Spellane looks at the life of Sir Walter Manny, its founder.

The London Charterhouse, a monastery of the Carthusian order, was established in 1371 with Sir Walter Manny as its principal founder. A flamboyant adventurer and adoptive Englishman, Sir Walter had fought against the French and made his name as one of the great captains of the early stages of the Hundred Years War.

Sir Walter’s career is typical of his class in the 14th century, when war service promoted social mobility. He arrived in England in the service of Philippa of Hainault, who became queen to Edward III. Within a year he entered the king’s service as an esquire, and within three years he was a knight. Promotion to the peerage as Baron followed in 1348, the same year he paid for the lease of land close to Smithfield to be used as a plague cemetery. Shortly after, he made an advantageous marriage to the Countess of Norfolk, a cousin of the king. 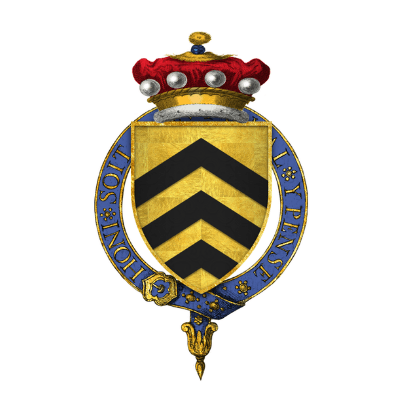 The business of war in the 14th century was based on the capture of prisoners – the higher the rank, the better. Prisoners were ransomed and returned home on payment. The highest ranked prisoners taken on the battlefield would be ‘sold’ to the king. Sir Walter is said to have stormed and plundered the stronghold of Bergerac, taking vast riches and securing valuable hostages. He was one of the most successful soldiers of fortune in the long-running conflict with France, and, having made his profit, seems to have turned his thoughts to the fate of his soul.

Sir Hugh Calvely and Sir Robert Knollys were two of the more prominent knights in the north of England who founded chantries or colleges of priests, where holy men would be paid to say prayers for the souls of the founder and their families. Some took it further, patronising the more fashionable ascetic orders, such as the Carthusians. Charterhouses were highly prestigious and usually patronised by royalty – Witham (Somerset) by Henry II and Sheen by Henry V.

The foundation of the burial ground near Smithfield was supposed to be followed be the foundation of a college of priests who would say prayers for the Londoners buried there, but also, and most importantly, for Sir Walter himself. The idea of founding a Charterhouse in London – a much grander gesture than a simple college – is said to have come from Michael Northburgh, the Bishop of London. It is likely that Northburgh had visited the Charterhouse at Paris and decided that his diocese ought to have one, too. After Northburgh’s death, Sir Walter continued to sponsor the project and eventually the monastery was founded in 1371.

Sir Walter Manny died the year after his monastery was founded and left in his will instructions for his burial in front of the high altar in a tomb of alabaster, with a knightly effigy, ‘in remembrance of me and so that men might pray for me.’ The tomb was thought lost after the reformation until the post-Blitz restorers Seely and Paget uncovered the site of the high altar in a garden next to today’s Chapel. Sir Walter’s remains were excavated and reburied – his tomb is marked in Chapel Court by the entrance to the Charterhouse museum.