The Bassano Family: ‘Excellent and esteemed above all others’

At the beginning of 1539, Henry VIII was once again preparing for marriage. The French ambassador reported that the king ‘gives himself up to amusement, going to play every night… with harps, chanters and all kinds of music’, and to this end, ‘sent men to France, Flanders, Italy… for musicians and other ministers of pastime.’[1] One group of musicians that caught Henry’s eye was a well-known Venetian family of musicians, the Bassanos who had distinguished themselves by playing at the Doge’s court in Venice, and where they also acquired the reputation as makers of high-quality instruments, such as recorders, shawms (a type of woodwind instrument), and sackbuts (a type of early trombone from the Renaissance). The Venetian ambassador, Edmund Harvel, wrote to Henry of the Bassanos’ music capabilities; they were ‘all excellent and esteemed above all other[s] in this city in their virtue’ and that it would be ‘no small honour to His Majesty to have music comparable with any other prince or perchance better and more variable.’[2]

Wishing for his court to emulate the Renaissance grandeur of those in France and Spain, Henry was eager to secure the family’s talents, especially for his upcoming wedding to Ann of Cleves. The brothers, Alvise, Anthony, Baptista, Jasper, and John had visited the English court beforehand, and Henry’s offers of rent-free accomodation, a permanent place at Court, along with all the influence and prestige that came with it would have proved very tempting to the family. Ultimately, all five of the brothers were appointed to the English court ‘in the science of art and music’, moving to England with their extended families and ‘all their instruments’ toward the end of 1539, and were allocated accommodation at the Charterhouse (Pic.1).[3] 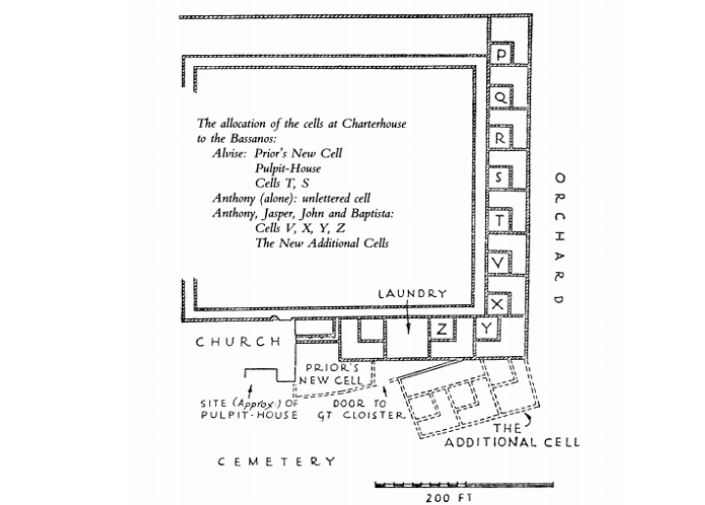 Pic. 1: Plan of the eastern and southern buildings of the Charterhouse, showing the allocation of cells to the Bassano family. ©David Lasocki

Before Henry VIII, it would have been unimaginable for lay persons (especially the Bassanos) to be inhabiting a house of worship; now with the Reformation overhauling the old order of England, the royal court was now seizing the abandoned monastery for its own means. The Chapel and Chapter House was subject to vandalism, whilst the King also used some of the derelict space to house his vast array of hunting equipment and tents.

Each brother was allocated a cell as personal accomodation; Alvise made additional use of the buildings, converting one into his personal ‘working house’ to manufacture his instruments. Furthermore, the Bassanos were relatively lucky in terms of their accomodation – they were able to access the Charterhouse’s unique clean water supply, as well as a laundry space and brewery, presumably used by the former monks. Additionally, they were located outside of the city, and therefore wouldn’t have been exposed to the claustrophobic and poor sanitary conditions inside the city walls (Pic.2).

Pic.2: The Charterhouse precinct (highlighted) in relation to the City of London. From the Agas Map of London, 1561. ©MapOfLondon.co.uk

From the Charterhouse, the family was able to build a successful instrument making business, mostly manufacturing recorders and other woodwind instruments: ‘instruments so beautiful and good that they are suited for dignitaries and other potentates.’[4] For example, such instruments were purchased far afield for wealthy clients in Munich, Venice, and Toledo! Another client was Henry VIII himself-upon his death in 1547, over seventy flutes and recorders were listed in his instrument collection, most of them made presumably by the Bassano’s.[5] According to Peter Bassano, a direct descendant of the family, a recorder made at the Charterhouse was one of the many items recovered from the wreck of the Mary Rose, which famously sank in 1545 (Pics.3,4,5).[6] Also, the Bassano’s were surrounded by prospective clients from the Tudor elite; Charterhouse Square was then residence to the French and Spanish ambassadors, and perhaps most notably, Catherine Parr, Henry VIII’s last wife, then residing with her second husband, Lord Latimer.[7] 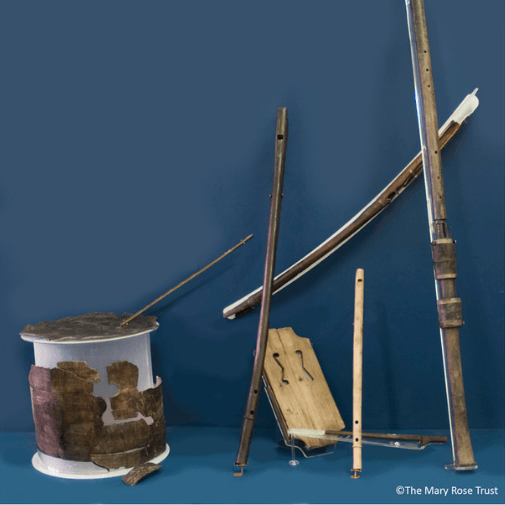 Pic.3 Remains of musical instruments (including a shawm, recorder, fiddle, and drum) recovered from the wreck of the Mary Rose. ©Mary Rose Trust

Pic.4: Remains of shawm recovered from wreck of the Mary Rose. Was an instrument like this made by the Bassano’s at the Charterhouse? ©Gramophone.co.uk

What was it like to be a member of the musician’s consort at the court of Henry VIII? The Bassanos would have been attached to the ‘Prescence Chamber’, a part of the larger court in all the various Tudor palaces: Whitehall, Hampton Court Palace, and the Palace of Placentia (now the University of Greenwich).[8] The main function of the consort was to provide music and entertainment, often for the monarch’s personal amusement, but also for noteworthy events, including royal weddings or the arrival of foreign dignitaries. It’s also possible given the Bassano’s prominence, they would have played at Henry’s remaining three weddings, including his abortive marriages to Ann of Cleves and Catherine Howard.

The Bassano’s were to remain at the Charterhouse until 1552: one of Henry’s prominent ministers, Sir Edward North, had been granted the property by Henry in 1545, and had decided to overhaul the old priory into a modern and imposing Tudor mansion. The Bassanos, now his tenants, and with their extended living and working space would have proved to be an impediment to his plans. North, with some questionable conduct for a landlord, harassed the family into evicting the premises. They were able to move to a new property in Mark Lane, near the Tower of London, and home to London’s Italian community. From there the family were retained at the English Court primarily as musicians, a position that they and their descendants would enjoy until the beginning of the English Civil War-that’s six monarchs altogether!

Today’s Charterhouse now bears little resemblance to the one that the Bassanos first saw when they arrived in England in 1539. However, it isn’t hard to imagine the sound of recorders, flutes, and viols that once emanated from these walls. The Bassanos, while little known today, were one of the most distinguished musical families of their day, and they surely deserve their place as one of Charterhouse’s more notable and intriguing residents. 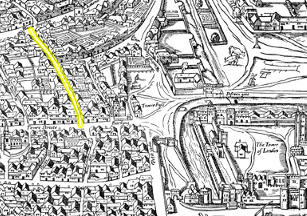 Fig.5: Mark Lane (highlighted), where the Bassano’s moved to in 1552, after they were evicted from The Charterhouse. From the Agas Map of Londio, 1561. ©MapOFLondon

[3]David Lasocki, ‘The Bassano Family, The Recorder, and the writer known as Shakespeare’,  http://www.instantharmony.net/Music/bassanos-recorder-shakespeare.pdf

[4] Quoted in Lasocki, ‘The Bassano Family’