Before his death in 1611 Thomas Sutton established the Charterhouse school and almshouse. By Act of Parliament there were to be 16 Governors and a Master responsible for daily business.

The foundation was greatly admired and as well as the Monarch Governors were drawn from the great and powerful including clergy, lawyers and members of the Court. One such Governor in the late 1600s and during the religious conflicts of the time was The Duke of Monmouth. He become a Governor of Charterhouse in 1675 and attended 8 of the 24 meetings held before he was displaced shortly before his execution in 1685. 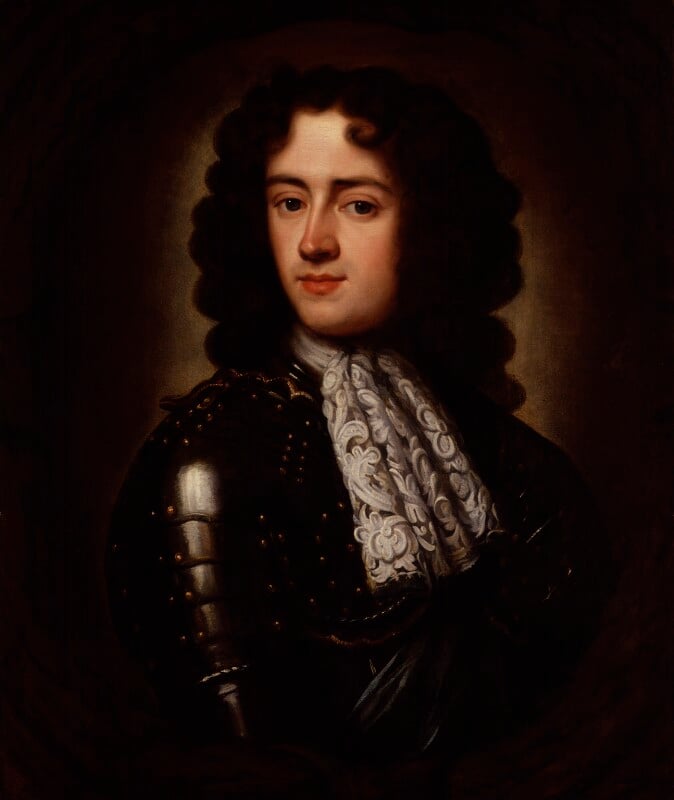 James was born on the 9th April 1649 in Rotterdam. He was the illegitimate son of King Charles II and Lucy Walter, who claimed to be the king’s wife; the two, however, had little contact after 1649. Lucy made a death bed confession that she had married Charles and Monmouth firmly believed this to be fact. Lucy and young James moved frequently, and in 1656 she took him to London. Within months of their arrival, the two were arrested and briefly imprisoned in the Tower by the republican government being released within a few months on a direct order from Cromwell. After their release Lucy and James journeyed to Flanders where in 1658 a penniless Lucy threatened to blackmail Charles. His response was to get an agent to kidnap the boy and take him to Paris where he was looked after by Lord William Crofts, a gentlemen of Charles bedchamber and whose name he took. As a youngster the boy’s education was woefully neglected and as an adult his writing and spelling were poor.

Two years later Charles was restored to the throne, and in 1662 the young James was returned to England and installed at court as a favourite of the King.  On February 14, 1663, Charles created him Duke of Monmouth and made him a Knight of the Garter. On April 20, Monmouth was married to the wealthy Scottish heiress Anne Scott, countess of Buccleuch. They were created duke and duchess of Buccleuch, and he took the surname of Scott. Charles lavished money and favours on him and treated him as if he were a Prince of Wales. This troubled the King’s brother James, Duke of York. Monmouth wasted most of the money he was given by the King. After a man died in a brawl in which he was involved he was given a royal pardon so as to prevent any possible prosecution. However even at this early date Monmouth was viewed as a possible successor to Charles by the reason that he was a Protestant and Charles acknowledged heir, James, Duke of York had Roman Catholic sympathies.

Monmouth was made captain of the king’s guard in 1668 and admitted to the Privy Council in 1670. He commanded English troops on the continent during the Anglo-Dutch War of 1672–74. He became captain general of all the armed forces in England in 1678. It was this that caused problems between Monmouth and his uncle James as the document naming him in this post referred to him as “my natural son”. The king signed this but when York pointed this out to his brother the King cut out the word “natural”. This had profound implications as to the recognition of Monmouth as legitimate! The following year Monmouth fought and beat Scottish rebels.

Meanwhile, the succession to the throne had become a burning issue in England, where papal hysteria had been aroused by rumours that the Catholics were plotting to seize power. The London mob showed support for Monmouth when Charles was taken seriously ill. On recovering Charles blocked all parliamentary attempts to exclude James, now a confirmed Catholic, from the royal inheritance, and in September 1679 he banished Monmouth from the kingdom. Nevertheless, the duke quickly returned in defiance of his father and set about building up a following. There were Pope burning processions at Smithfield in November 1681 where crowds drank to Monmouth’s health causing the King to ban him from court for a period while recalling York from abroad. In this crisis Monmouth was championed for the succession by Anthony Ashley Cooper, Earl of Shaftesbury, the leader of the anti-Catholic Whigs in Parliament. In 1682–83 Monmouth became involved in the Whig conspiracy against Charles and James, known as the Rye House plot. This plot was to murder the brothers as they returned from Newmarket races. The plot failed however. After a secret meeting between the brothers and Monmouth he was pardoned for his part in this enterprise, but disputed an official court proclamation on the subject leading to his banishment from court and he took refuge in the Netherlands early in 1684.

Upon Charles’ death on February 6, 1685, the Duke of York acceded to power as James II. He asked William of Orange to arrest Monmouth but the Duke tipped Monmouth off. He staged an invasion landing at Lyme Regis on 11th June with 82 followers and issued a declaration in which he accused James of poisoning the late king, usurping the throne and ruling against the law. He quickly raised over 3,000 men, but he was unable to rally the gentry to his rebellion. On July 6 his army of peasantry was totally defeated on the plain of Sedgemoor. He fled but was soon captured hiding in a ditch near Ringwood in the New Forest. He was beheaded by a well paid Jack Ketch on Tower Hill who botched it and official records say it took five strokes of the axe.

Although the strikingly handsome Monmouth had the outward bearing of an ideal monarch, he lacked the intelligence and resolution needed for a determined struggle for power.